Leon tells the story of a young girl orphaned in the first quarter of the film at the hands of a power hungry DEA agent. She seeks refuge with Leon, the hitman down the corridor, you know…we’ve all got one of those, right?
Well, Leon begrudgingly lets Mathilda in but after a bowl of cereal tells her she needs to go someplace else. Twelve year old is wise beyond her years but at the same time has not been dealt the best cards in life to know what is normal and what isn’t. She quickly grows attached to Leon and is intrigued by his ‘cleaning’ job. With no stable male figure in her life, she looks to Leon to fill that void. The two become a ‘cleaning’ team and go about New York City removing the dirt hiding behind chained apartment doors.

The pair rapidly secure a routine of milk drinking, training, taking care of Leon’s best friend, (his aglaonema plant). This routine presents a poetic approach to life, as the pair co-exist together for the most part in harmony and then the occasional break, or caesura occurs, for the poem to breath and then they resume. There is a rhythm to their friendship  that is so beautiful displayed by Besson. He really takes the time to let us, the viewers in to those moments that are uncomfortable, yet shaping. The film was heavily criticized for it’s sexualization of a young girl and her ‘friendship’ with an older man. The film defended itself by constantly highlighting the line it wasn’t crossing. 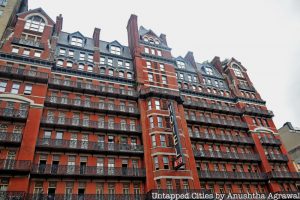 Of all the hotels in New York for the film to be set in, it’s no other than the Chelsea Hotel, famed for housing the greatest musicians in their wildest years; Hendrix, Joplin, Smith, to name a few. It’s a badass place with badass history and I love that Besson chose this iconic building in rock music history to place these unique characters. It’s a place where the rules aren’t like they normally are elsewhere, it’s a place for wild freedom to occur.

We see Mathilda swinging her legs off the iconic stairwell as she sneaks in a smoke. Besson purposefully includes the architecture in the cinematography to highlight the extremity of the situations. The hotel is huge, Mathilda is small.
This stunning shot of Mathilda’s emphasizes how she’s on the brink of something big. After all, it’s not long after this scene that her entire family is wiped out.

Besson subverts normative ideology in Leon, when he reverses the roles of good and bad Leon should be a fearless, unapologetic hitman, Mathilda should be a sweet, naive young girl, The DA officer; Stansfield – should keep law and order…
Instead we are faced with a moral upheaval through these characters. DEA Officer Satansfield (!), I mean Stansfield obsesses over classical music and ritualizes his ‘work’ by discussing his favourite composers with the victims.  Gary Oldman’s performance is completely captivating as this eccentric pill crunching, accent chameleon and purveyor of classical violence

When Leon and Mathilda go on their ‘cleaning spree’ (!) Mathilda pauses to put on a sweet red crocheted hat. When Leon asks her what she’s doing, she replies ‘can’t afford to catch a cold’. This is indicative of how independent Mathilda is. She doesn’t need adults, she doesn’t even need Leon. But his companionship helps her to understand routine and doing things in the ‘right’ way even if that is learnt through assassination.

The tragedy of Leon’s death represents an unconditional love. One that separates your love for someone from everything else. No matter what Leon was going to make sure Mathilda lived. His one true love was dead, he may have felt his time on the earth was better served,  by serving someone else. Allowing Mathilda to live, sacrificing himself shows the humanity in inhuman beings. To take so many lives, you value for life itself will dwindle, we see this with Stansfield. He has no real empathy, for he masks it will the pill he takes. It’s almost like, he feels the humanity seeping back in, so he zaps it right back. When Mathilda confronts him about killing her brother, his response is merely, ‘oh, so you want to join him?’

Of course the Chelsea Hotel was not unfamiliar to Oldman, who played Sid Viscous, basses of the Sex Pistols in Alex Cox’s 1986 movie about the musician and his girlfriend, Nancy Spungen. Oldman returns to the scene of the crime, with a vigorous approach to psychopathy as opposed to his guileless naivete as Sid Viscous

A lot of what is special and unique about this film is the way that the two’s assumed characteristics are swapped. Mathilda exhibits mischievous sexuality, Leon exhibits lack of basic skills, like reading. In the ‘normal’ world these two things would be the other way around. But what is done so excellently is, not only are their assumed stereotypes swapped, they have times and places in which they let out different sides of their personalities. On the job, Leon is relentless and unapologetic, steadfast in his approach to ‘cleaning’, at home he is simple, ritualistic, disciplined and introverted. The symbolism of drinking milk juxtaposes the strong, dynamic hitman that Leon is with imagery of a drink synonymous with childhood and being told that, ‘drinking calcium will make your bones strong. Mathilda has strong willed persona which she uses with kids her own age, pitying their immaturity with all the confidence of a thirty year old. Yet at ‘home’ with Leon, she lets her guard down, allows herself to act her age – sometimes and outputs emotion.

Typically, when a protagonist dies it is tragically sad, but Besson manages to capture the poetry of it. What it means to die, what you leave behind, what you sacrifice. Mathilda taking the aglaonema plant under her wing beautifully captures this poetry. Before Leon met Mathilda, he cared for this place wholeheartedly, giving it light, shade and water. At a certain point, Mathilda wishes to be nurtured in the same way. The irony of her and the plant being situated in the places they are meant to be, is bittersweet and necessary.