Ashley Frangipane, otherwise known as Halsey,  is basically everything that makes a pop star great in the 21st century.

From her rise to fame through uploading covers online to global stardom, the singer has proven that you can’t put her in a box. This is why the term ‘Avant-garde’ comes to mind. ‘ people or works that are experimental, radical, or unorthodox with respect to art, culture, or society. It is frequently characterized by aesthetic innovation and initial unacceptability’.

Just take Halsey’s performance of ‘Eastside’ from Saturday Night Live or ‘Graveyard’ at the 2019 AMA’s where the singer creates performance art,  Jackson Pollock style, splattering paint on stage, whilst she sings and performs her stories. Halsey permeates her passion for multifaceted art regardless of the setting. A personal favourite moment is where she sung probably the most heartbreaking but also badass break up song, ‘Without Me’ at the Victoria Secret Fashion show in 2018. She was dressed in all white with beautiful accessories including feather eyebrows…on the most mainstream supermodel platform..I love it!

Halsey’s debut album Badlands, released in 2015 is a beautiful conceptual body of work that the singer creates lives within for these eleven songs, this world is the dystopian future society named Badlands. I maintain that this album is one of the best debut albums in pop. It established Halsey as a force to be reckoned with. One of my favourite things about Lady Gaga, (and there are many) is her acoustic performance of her highly electronic and produced songs. It provides an intimate invitation into the song and that is what Halsey is so great at. She has such a special ear for sonic expression.

Since this glorious album, Halsey went on to give us all the wonderful Hopeless Fountain Kingdom album in 2017, another conceptual body of work that revolved around a pair of lovers inspired by Romeo & Juliet.

This era was utterly fabulous! It was lapped up by the radio stations who loved the more rounded sound of the songs, it also had innovative and thought-induced music video’s that accompanied the singles, such as Bad at Love which really encapsulated the aesthetic vibe of Baz Luhrmann’s ’96 modern retelling of Shakespeare’s Romeo & Juliet.

I suppose the thing I most admire about Halsey is that she’s a wordsmith, a poet and a storyteller. That’s her thing and she’ll use whatever tool she can to tell a story in the most unique way. As a member of the LGBTQ community as bisexual and also a survivor of bipolar disorder, she fights for equality and justice across many social issues. To pop music, Halsey is kind of an enigma, in her words, she’s just ‘this fucked up stoner kid who made it’ so is kind of as real as it gets in pop. You typically see this background in punk/rock, but Halsey has managed to capture her demons and release them one by one through songs and artistic  processes.
Halsey’s participated in the protests for racial justice was documented on social media as the singer took to the streets, with the people as the people. In June, she launched The Black Creators Fund that helps to amplify black artists.

In 2020, Halsey released Manic – a poetic ode to her mental health and her identity as she navigates through life.

Last year was a tumultuous one of social justice and Halsey’s album brought me a lot of comfort in it’s beautiful, but also bleak honesty. In February, Halsey played the Ziggo Dome in Amsterdam. As I was living there at the time, I was so lucky to be able to catch the show, as the rest of the tour thereafter was cancelled due to the burgeoning threat of COVID-19.

It was spectacular! Her passion for what she was doing up there on that stage was palpable. She must have thanked us all a bunch of times for being there – that’s a true artist. 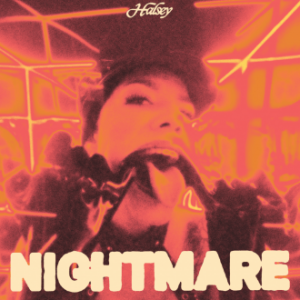 Halsey has truly given herself over to the life of an artist in the sense that she understands her audience and what they need and want.

The song ‘Nightmare’ is one of my all time favourite song by Halsey. It was released in May 2019 as a non-album single, ( to my immediate horror). Although I now actually quite like the idea of the song existing in it’s own little realm, a sonic outsider.

In all three of Halsey’s album’s, she writes about love in the generic, human sense. This is romantic love for women, men, unconditional love for family and platonic love with friends. I am always so excited to see how Halsey navigates her way through the Pop industry, with a little bit of spice and edge but always the gift of storytelling.